A school united in joint endeavour and shared delight 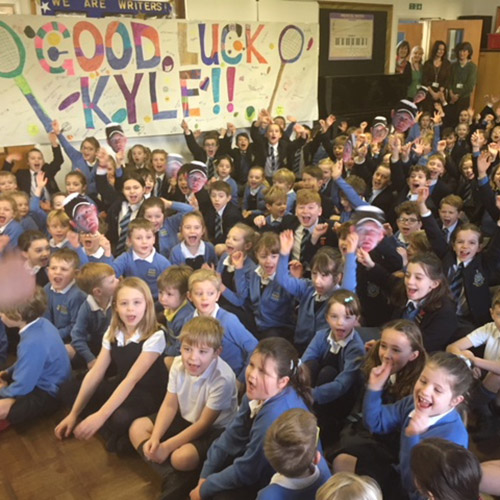 We have had a busy start to the year, even by our standards, with ?extra curricular activities in both the School and Prep School stretching, challenging and entertaining pupils, as well as generating a sense of achievement.

One week was particularly eventful and summed up my pride in our school and what it means to be a Pocklingtonian. It was the week we had our House Music Festival and former pupil Kyle Edmund reached the semi-final of Grand Slam tennis tournament The Australian Open.

Also that week – and this is a fairly typical but no less important – our hockey, netball and swimming teams were in action and the CCF had an air experience flying trip, all examples of individuals working together to support each other and represent the school to the best of their ability.

In short, there was a huge buzz of excitement as pupils across the year groups united in joint endeavour and shared delight in what Pocklingtonians past and present could achieve.

Kyle’s Australian Open semi-final came the morning after half the Senior School had been involved in the last of two evenings’ House Music Festival performances - but it didn’t dampen the enthusiasm for his showdown in Melbourne.

BBC Breakfast News sent an outside broadcast crew to capture our rising excitement in the run-up to the match. Several Prep and Senior School pupils and their parents arrived at the School Sports Hall at 6am to be part of the coverage. Despite the early hour, older pupils played tennis behind the tv presenter, younger pupils worked together to produce a Good Luck Kyle banner, and parents and teachers gamely cheered for the cameras on request.

The BBC then crossed over to the Prep School Hall, where almost the entire Prep School cheered Kyle on while following the match on the big screen. But the excitement wasn’t limited to that room: Kyle’s success galvanised us all, lifting our spirits and lightening everyone’s step.

The 23-year-old might have lost the semi-final but just reaching it moved him up to 26th in the world tennis rankings. Current pupils didn’t coincide with him at Pocklington School but they still think of him as “one of ours,” which guarantees him their loyalty and support. Like any close-knit family, we look out for our own even after they’ve flown the nest.

Kyle himself strikes me as a fine example of the best Pocklingtonian values. I admire his calm focus and resilience, his modest, respectful attitude despite a steely determination to win, as well as the fact he remains anchored by his family and retains close ties with our school.

I’d like to think what binds Kyle – and all Pocklingtonians – to Pocklington School is a common sense of identity based on a shared set of values rooted in our “truth and courage” motto.

Anna Hughes, the Prep School’s History co-ordinator who taught Kyle, summed it up well when she said: “Kyle embodied these characteristics in his time at our school and I can still see them reflected in his actions as a sportsman and ambassador for our country even today.

“He was studious and quiet in lessons but this quietness wasn't negative; it carried with it a deep strength and thought. Our staff talk of a time when, at an outward bounds centre, he calmly, quietly and confidently organised the group into achieving the goal through direct purpose, clear thinking and the respect of his team. This can still be seen in how he approaches his tennis. This quiet thought and determination can be seen in his play”

That same calm, clear purpose and direction was clearly in evidence from our Sixth Formers in the run-up to House Music Week, as they inspired and enthused younger pupils to join the showcase of each house’s musical talent.

The pupils supported each other, listened to each other’s points of view and worked as teams to decide which songs to sing and how to present them. Individual talent was there aplenty, but they understood the importance of mutual support and encouragement as they worked towards a common goal.

Martin Kettlewell, Director of Music, delights in the familial sense of loyalty and pride the House Music Festival inspires in pupils, driving them on to work together and do the very best they can.

He said: “My greatest sense of pride is to see the vast numbers of students (49% this year) rushing off stage after their final item; their enthusiasm, joy and pride in their achievements clear to see on their faces. Whatever the relative merits of the music on offer, the wider skills developed through the leadership of this event by our 6th formers, are life-skills that will benefit them beyond their time at Pocklington.”

That week’s events, and indeed the whole of last half term, left me with an overwhelming pride in Pocklingtonians past and present. We draw strength from our sense of community and family, respect the contribution everyone can make, and strive together to achieve success.