Headmasters' Blog - The values which inspire for life 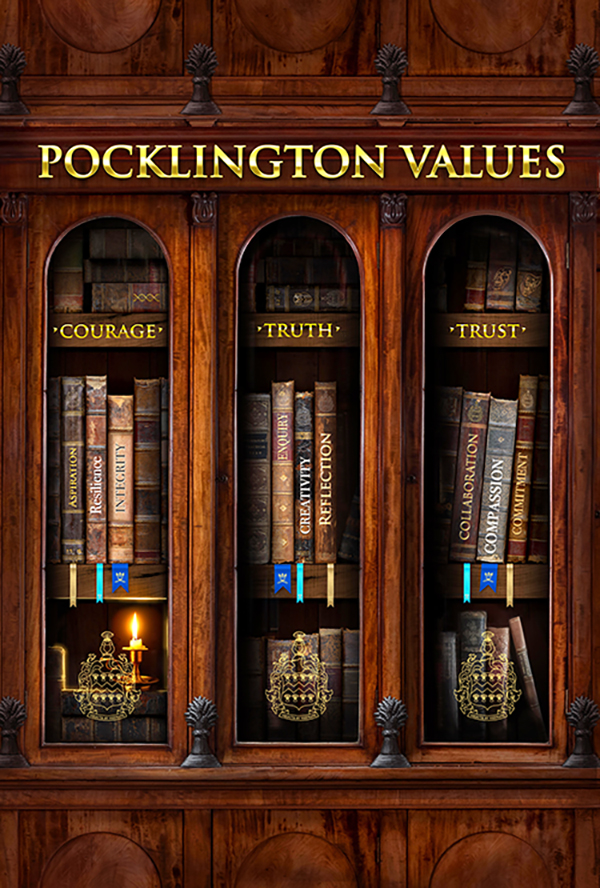 I arrived at Pocklington School as the newly-appointed Headmaster with the view that school mottos were something headteachers might preoccupy themselves with whilst the school community focused on the daily task of education.

But when I commissioned focus groups to gain further insight into what makes Pocklingtonians tick, I was in for a surprise. Because among pupils, parents, teachers and support staff, the themes of truth, courage and trust came through again and again.

It was a significant moment in my new role and made me consider afresh our founding motto Virtute et Veritate, With Courage and Truth; and what it still meant for us all as a community 500 years later.

‘Courage’ means being brave enough to challenge ourselves and each other to be better, and to leap into the unknown with our learning. It means having the self-belief and resilience to aspire, and the integrity to live by sound moral principles and be respectful to others.

‘Truth’ underlines our emphasis on open, honest and informed debate to stimulate creativity, intellectual curiosity and initiative. It is particularly important today as we see truth challenged repeatedly within political discourse: understanding and protecting truth takes courage and there has seldom been a more important time to help young people understand its significance.

‘Trust’, the third value articulated by the School community ten years ago, reflects the Christian ethos guiding our caring and straightforward approach. We treat each other with respect and uphold our tradition as a friendly and compassionate school. Trust is also central to effective teaching because it involves support, collaboration and mutual respect.

Over the years, I’ve increasingly appreciated how important it is to have a clear set of values to lead by, which are recognised and shared by the whole community. I’ve found myself drawing on those values as a touchstone which has helped when facing difficult challenges.

This idea was progressed earlier this year when teachers suggested we might encourage aspiration and ambition in our pupils by creating a set of school values centred around courage and truth. I agreed it was important to make those values central to the student experience, so they knew what was expected of them and could be inspired and galvanised by their message inside and outside the classroom.

The group, led by our Curriculum Director and Head of Sixth Form Laura Powell, then sought feedback from all staff, teaching and support, pupils, governors and parents who were asked what makes a Pocklingtonian, and a Pocklington education.

Everyone’s contributions were whittled down into a set of values which are now being shared with all, with the aim that they will become increasingly discussed and embedded across all areas of School life. Under the heading of Truth, for example, are the explanatory sub-headings Enquiry, Creativity and Reflection, with further clarification beneath each one. Under Enquiry pupils are advised to try and “be curious about the world around me, asking questions to develop my understanding and solve problems.”

Teachers have a similar reference point too, consolidating our beliefs and aims. The same subheadings are followed by clarification of how it should inform their teaching. Thus, under Enquiry, teachers are advised to: “Build a varied programme of activities, including those which develop the skills of analysis and evaluation and encourage pupils’ curiosity.”

The messages have been launched in divisional assemblies and individual values will be discussed in future assemblies and by tutor discussions in smaller groups. They are being shared in a display in the main School corridor, and this half term 2nd Year pupils will have a cross-curricular learning day based on the theme of Courage.

Our boarding houses will devise displays based on how the values are relevant to them and academic departments are also creating way of incorporating them into their schemes of work. Sports staff are considering how the values are embodied through the way that pupils train, interact and perform.

In the Prep School, Year 3-6 pupils have been exploring what the different values mean to them and considering the importance of good role models such as the Queen. They have already looked at Aspiration, one of the qualities of Courage, and the meaning of associated words such as motivation, independence and standards. They are now moving on to explore the significance of Resilience.

Pre-Prep children explored Aspiration through different characters from history, like Florence Nightingale and her work to help injured soldiers during the Crimean War. Raising standards within hospitals so they became places of hope rather than death, took a great deal of aspiration, courage and perseverance, qualities which should galvanise us all. When I leave Pocklington School as Headmaster at the end of this term, I will take with me the values of Truth and Courage – important to me as a moral touchstone. I also hope that, especially now the explanations have made it even more relevant to our pupils, those values will also sustain and inspire them for life.