The challenge that's made my Christmas 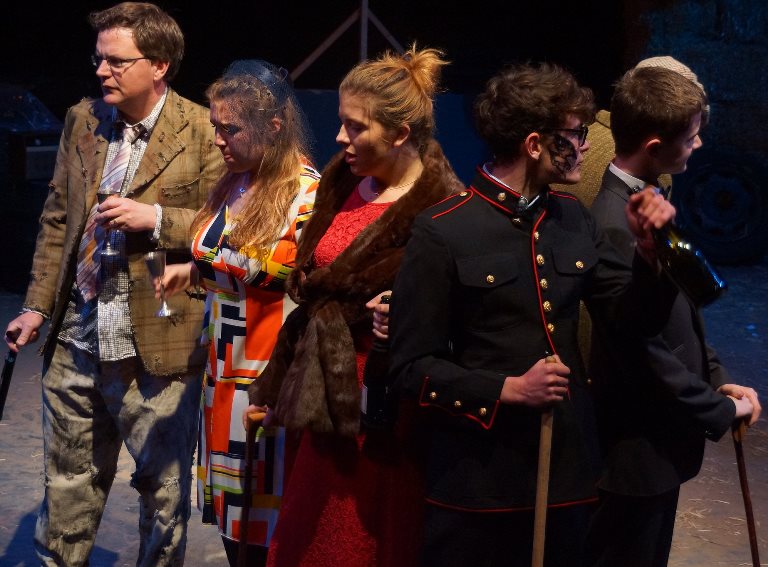 Headmaster, Mark Ronan, with fellow cast members during a scene from Animal Farm

We’ve enjoyed an eventful and rewarding term at Pocklington School, and pupils and teachers can begin the Christmas break with a real sense of satisfaction and achievement.

From newcomers to the School who have settled in and grown in confidence as the weeks passed, right through to our Sixth Formers buckling down to serious study, there’s a positive feel about the place which is great to see.

I hope every pupil has not only progressed with their studies this past term but also made discoveries about their own talents and strengths, through our individually-focused curriculum inside and outside the classroom.

I strongly believe that we never stop learning, and that it’s good to challenge ourselves, no matter how old we are. Younger readers may be surprised to hear that from their Headmaster – but working in a school with as many opportunities as this one makes you even more aware of what can be achieved.

So when I heard that our Head of Drama, Mr Heaven, was planning to stage a School production of George Orwell’s novel Animal Farm, I found myself telling him I’d like to be involved.

I haven’t acted since I was at school but the adaptation’s themes, of challenging prejudice and celebrating difference, resonated with me. I envisaged some sort of voiceover role – and when Mr Heaven offered me the part of Mr Jones, the Farmer, I was taken aback.

This wasn’t the challenge I’d had in mind – but I decided it would do me good to venture out of my comfort zone. Once I’d committed, I was also determined that I was going to perform to the best of my ability, to do the role justice, and avoid letting the rest of the cast down.

Aaah, the cast….  I’m reliably informed there was a tumbleweed moment when pupils heard their Headmaster was going to join them. But I was touched and quite humbled by the way they welcomed me from day one.

My fellow cast members ranged from young and relatively inexperienced chorus members to principals with enough experience and talent to hold their own on any stage. But there were no egos; we all pulled together to make our show a success.

I often praise our school’s sense of community and I was delighted to find that extends to its Headmaster, too. The pupils were encouraging throughout, giving me feedback which was greatly appreciated, picking me up when I felt I’d got it wrong, and generally making me feel I was part of the team.

Huge credit to Mr Heaven, who was calm and focused throughout, to Steff Ryan for his impressive lighting and sound, and to Cheryl White for her amazing costumes and the way she soothed actors’ nerves.

I drew a huge amount of strength from the shared experience this joint endeavour brought. Both the anxiety when things didn’t quite come together and immense satisfaction when it did were – and are - an essential part of the creative process which is far more enjoyable when experienced as part of a group.

The pressure of being in the spotlight in front of the audience reminded me how much courage children have who take to the stage in school productions.  Whether or not you have lines to say, there’s a pressure to concentrate and support your fellow cast-members throughout.

It’s been quite a journey for me and I’m now very pleased I pushed myself to do it. I not only learned a lot about myself, our wonderful school and its talented staff and pupils, but I feel energised by my own small achievement.

Well done to anyone who’s taken the stage this Christmas, from the youngest children taking part in a school or nursery nativity, to grown-ups starring in a festive play or pantomime. I hope you found the experience as enjoyable and life-affirming as I did!

Have a wonderful Christmas break, everyone, and I look forward to seeing you in the New Year.