The leaders in our midst 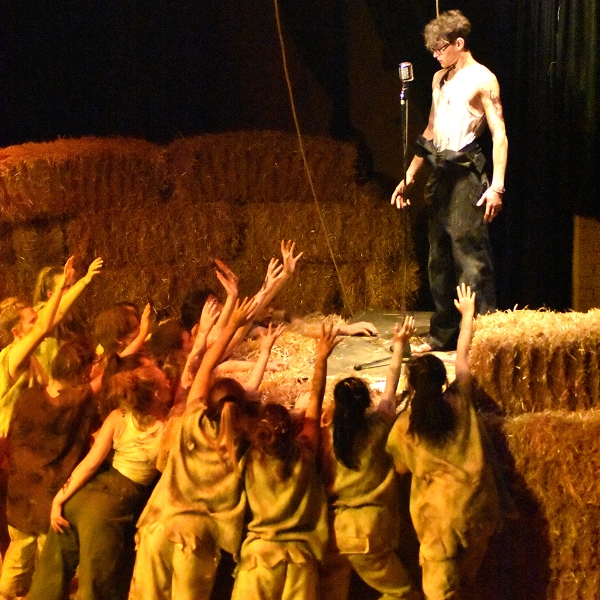 Cast members from Pocklington School, during a performance of Animal Farm

What makes an effective leader? Leadership styles have continued to make the news this New Year, with the different approaches of our domestic and world leaders scrutinised and compared.

Our school’s production last term, Animal Farm, showed leadership at its worst, as George Orwell’s animals ousted one self-interested leader, only to see an even worse tyrant emerge from their midst.

It was while taking part in that production, playing Mr Jones the Farmer, I reflected more upon the privilege and responsibility of leadership. Are the most effective leaders those who are very loud and visible, or those who remain behind the scenes, quietly keeping the wheels in motion?

Many different examples of good leadership were on show during the rehearsals and staging of Animal Farm; too many to mention in this blog.  I admired our Head of Drama Alan Heaven’s calm, clear communication of his vision of the play he had adapted, and that he welcomed cast members’ interpretations and suggestions.

Backstage support was also impressive, enabling pupils to take on the responsibility of delivering the lighting and sound, and grow in confidence with each show; whilst the Wardrobe provided a safe space with cheerful support, calming performers’ nerves.

I was equally impressed by the pupils who, in leading by example, set the tone for the rest of the cast and crew.

Two of our Upper Sixth Formers were part of the ensemble as cows. Because the clever costuming avoided cliched animals’ heads, they had to portray their characters by movement, with the whole cast on message to create the right visual tableau. From the start, both had the courage to fully commit to this “physical” form of characterisation and, in showing by example how this could be best achieved, they motivated the rest of the cast to follow.

Another Upper Sixth Former who was in charge of props - and also assigned to prompt me so I didn’t miss my cues, helped the whole show run smoothly with a steady, well-organised approach which influenced others to share her quiet confidence that all was as it should be.

They are just a couple of the many examples of good leadership I observed from the cast during rehearsals. Several pupils made huge contributions to galvanising morale by remaining cheerful and positive, noticeably boosting anyone who felt disheartened with kind words of reassurance and encouragement.

So what did I take, in terms of leadership, from my involvement in the school play?

First, it was that leadership does not come from having your name up in lights. Nor does it come from the absolute power to bark orders, like Animal Farm’s autocratic leader, Napoleon. Leaders are best measured by how they conduct themselves rather than how they tell others to act. They also behave respectfully towards other people, giving them the freedom and confidence to innovate and evolve.

Leaders should never take their eye off the team’s shared aim, even though they might never get the credit for it because the spotlight falls elsewhere. They might regard themselves as just one cog, but not only do their actions inspire others, without them the wheel would cease to turn.