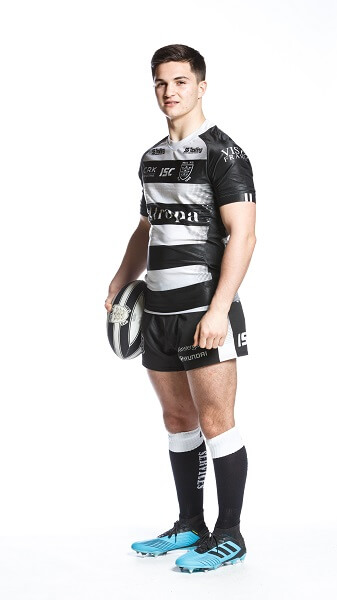 Upper Sixth Former Ben McNamara has made his debut as a professional rugby player while juggling his studies for A Level exams this summer.

Ben signed a professional contract with top flight Rugby League club Hull FC in April last year and has twice turned out for the first team in pre-season friendlies this month.

He trains three times a week at the club, completes three weights sessions per week and plays regularly for the Hull FC reserves and academy teams. But Ben maintains his A Levels come first.

He said: “The chance to play for my hometown club was an exciting opportunity, and the willingness that Hull FC showed to allow me to continue studying A Levels whilst playing academy and reserve grade rugby was a huge factor in my decision to sign a professional contract. It can be quite tiring, juggling my sport and schoolwork, but I enjoy doing both.”

Ben did exceptionally well at his GCSEs, achieving nine grade 9 and A*s. He is studying Chemistry, Physics and Religious Studies at A Level and has been predicted top grades.

He said: “I considered applying to study at the University of Hull but came to the decision that I wanted to give my time and effort into pursuing a rugby career and that a degree was too big a commitment to take on alongside full time training at this time. I’ll go into training with Hull full-time after the exams in June.”

Jonny Wheeler, teacher i/c Rugby and Head of Athletic and Coaching Development, said: “I’m very impressed by Ben’s level-headedness and drive to excel at both his academic and sporting career. To have a pro rugby contract, which involves a heavy training and gym schedule, as well as three difficult A Level subjects is a lot to juggle but he’s doing exceptionally well. We’re very proud of him.”

Ben said: “The school has always been very understanding of my commitments and allowed me the flexibility to play fixtures. Mr Wheeler has played a large role by providing a strength and conditioning programme to help my physical development and he also helped get me an opportunity with Yorkshire Academy [former Yorkshire Carnegie] U18s. My subject teachers have also been flexible with things such as homework, and it’s helpful knowing you have their support.”

After his GCSEs, Ben toured France with the England Rugby League Youth Squad. He also played for the school’s 1st XV Rugby team and the Yorkshire U18 Academy, both of which are Rugby Union, but says he has found no difficulty switching codes.

“I think both codes are great in their own right but I grew up in a Rugby League family and have been playing it since I can remember so it probably comes a bit more naturally. Sometimes it takes a couple of training sessions to get back into the swing of things when switching codes but there are lots of transferable skills from playing both sports which are really beneficial.”

Ben, who admires former Australian National Rugby League player Johnathan Thurston and ultramarathon runner and former US Navy SEAL David Goggins, says his aim is to become an established first team player at Hull FC. He added: “My dream is to play for the England national team and the NRL in Australia.”