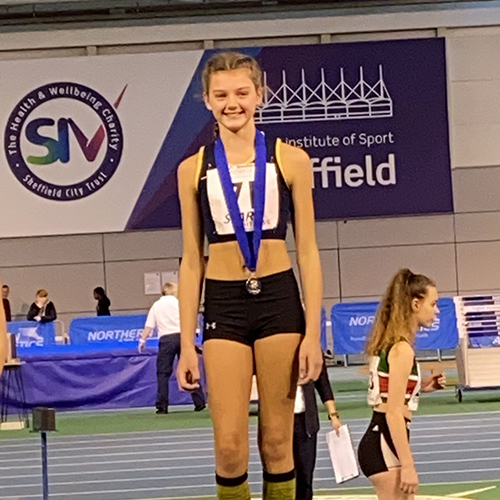 First Year pupil Emily Marshall is the Under 13 Northern High Jump Champion after achieving a personal best jump which was 8cm clear of her nearest rival at the recent Northern Championships.

Emily, who trains three times a week with the Kingston Upon Hull Athletics Club, won a gold medal with a 1 metre 43cm jump which was better than many of the competitors in the next age group up, the U15 girls’ final, at the Sheffield event.

She said: “I’d been training since October for this competition so I was really happy to win. As I jumped I knew I’d cleared the bar but I was worried I'd knock it off with my heels!”

Emily realised she had a talent for high jump when she broke the Year 4 record at her previous school: “After that I joined the athletics club and asked for extra high jump training because I wanted to break the records for the next two years, which I did!” she said.

Last year she won the HMC Athletics North East high jump competition for her age group, clearing 1 metre 38cm at the Gateshead event, which spurred her on to strive for further success.

“My athletics club coach Bob Hadfield has really helped me to achieve my goals so far. He comes to my competitions and gives me confidence to win,” said Emily, who now has a 1 metre 45cm competition jump in her sights

She added: “I'm ranked 5th in the UK, I need 1 metre 52cm to be equal first so that is my ultimate goal over the next few months.”

Georgia Hird, Resident Sports Assistant, said: “Congratulations to Emily on this excellent result. She is an outstanding example of how dedication and determination can nurture a talent into winning form. We are delighted to be supporting her with extra strength and conditioning training and look forward to seeing her achieve her next aims.”