A stroke of luck for newcomers at Birkdale Bucket Golf Competition 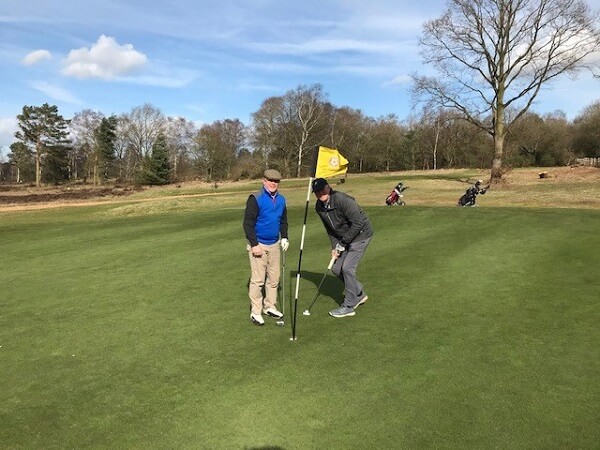 After last year’s success in the Birkdale Bucket, the pressure was on this year's team to retain the silverware, but it was always going to be an uphill struggle!

In a competition where the best four scores count, Pocklington fielded a last minute team of four players: Mike Strong (66-76), Dave Morgan (68-75), Dave Harrison (68-75) and Jonathan Rosendale (70-78). Thanks must go to newcomers Dave Harrison and Jonathan who gallantly stepped in at short notice to make up a team depleted by genuine absence and injuries.  However, the Pocklington crew made their presence felt and there was due reward for the team’s loyalty and efforts.

On the Saturday, teams competed for the Birkdale Bucket.  Dave Harrison, in his first year of competing in the competition, scored a magnificent 33 points, to take runner-up in the Hinchcliffe Spade and win the Pocklington Plate.  The other scores were Mike Strong (30), Dave Morgan (23) and Jonathan Rosendale (22), placing the team fifth out of seven teams, narrowly missing the wooden spoon!

If Jonathan was disappointed with his performance, after enduring a long drive from the South early on Saturday morning, his luck changed rapidly the following day.  He played an excellent round of golf on a hard scoring course plagued by strong winds, and won the Sunday foursomes convincingly.  The very pleasant winner’s cheque surely made the journey home feel shorter!

Next year, the competition will be held on 14-15 March, so if any golfing OPs (maximum handicap limit of 20) would like to play, please save the date in your diary – you will be very welcome.  This annual event is played on an excellent, historic course at Woodhall Spa Golf Course, Lincolnshre and is rated 9th in England, 26th in Europe and 78th in the world.

The event begins with an optional informal practice round on the Friday afternoon, followed by a fun dinner.  After the Birkdale Bucket is played on the Saturday, there is usually time to watch the Six Nations Rugby before settling down to an entertaining evening dinner and auction.  The 18-hole foursomes for the Hinchcliffe Tankards follow on the Sunday, with a lunch to finish the weekend.

If you would like to express interest in playing next year, please email Mike Strong or alternatively Rachel Dare in the OP office.

If you can’t wait until next year and are a player with a single figure handicap, The Grafton Morrish qualifying round for scratch foursomes is scheduled for Sunday 12 May at Huddersfield Golf Club, Fixby Hall.  Mike Strong is eager to keep on the OP tradition of entering a team in to this competition, so if you are interested, please do contact him.