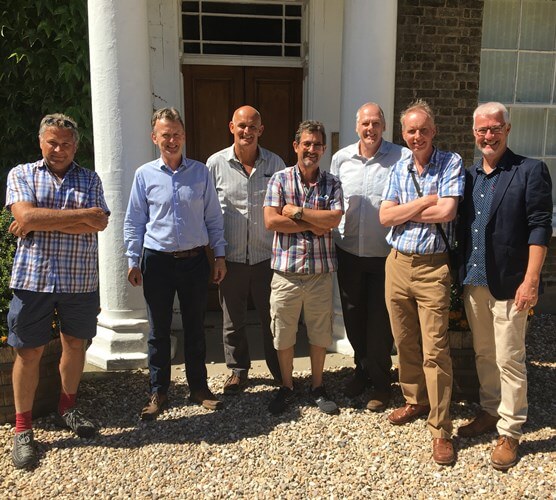 With blue skies and wall to wall sunshine, the weather could not have been better for this year’s OP Summer Reunion which took place on Sunday 1 July 2018. 60 OPs, staff and guests came for lunch at and enjoyed archive visits, school tours or playing for the OP teams in the annual cricket and tennis fixtures. A particular highlight on the tour this year, was a visit to the new Art & Design Centre which was officially opened by Lord Halifax in May.

OP President, Trevor Loten (70-80) welcomed guests back to the school and thanked sports staff, catering staff and the OP office for their support in making the event happen. He also wished Headmaster, Mark Ronan, and his wife, Fiona, well for their move to The King’s Hospital school in Dublin at the end of the Michaelmas term. In response, the Headmaster said how appreciative he was to OPs for coming back and staying connected with the school. Of particular note was the presence of three OPs who were at the school during WW2, 75 years ago. They were: Andrew Dunning (40-43), Peter Blacker (40-46) and Brian Thackray (42-47). Peter recalled the night that two bombs dropped in a night time raid, narrowly missing Dolman boarding house. He also thanked OPs for their support in raising the funds for the new Art & Design Centre.

After lunch, school tours were led by Susan Kay, Leanne Maycock, David Dyson and Rachel Dare. Those touring included a group of 1978 leavers, some of whom had not been back to school since they left 40 years ago!

In the cricket, the school boys won by a narrow margin for the first time in quite a few years. Similarly in the tennis, the OPs suffered defeat in the main men’s matches, although an OP pair won this year’s Edmund-Loten mixed doubles tournament in a tense final.

The date for next year’s Summer Reunion will be Sunday 23 June 2019.