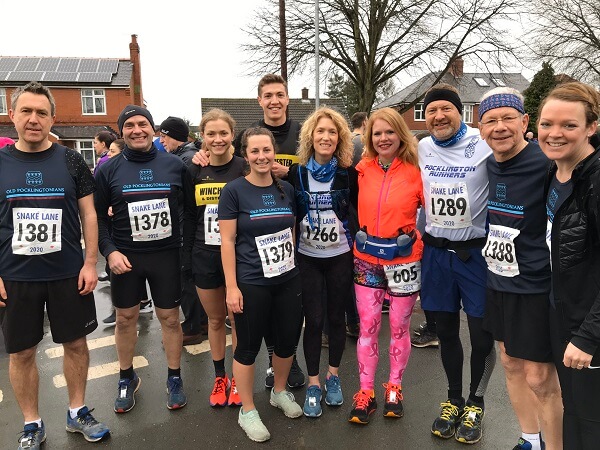 A squad of 11 OP runners took part in the 29th running of the Snake Lane 10 mile race organised by Pocklington Runners on Sunday 23 February 2020. This was the first time an OP team has entered the race and based on the positive feedback so far it is likely to become a regular date in the OP events calendar.

The Snake Lane starts and finishes in Pocklington and is a fairly flat course with a winding stretch that ‘snakes’ its way through the beautiful East Yorkshire countryside via Bishop Wilton at the foot of the Wolds and finishes in Market Street in the centre of Pocklington.

Martin Davies (Current staff) and Phil Hurst (Honorary OP) ran in place of John Skinner (75-82) and Lewis Papa (96-03) who transferred their places before the deadline due to injury. Oliver Cockerill (14-16) and Georgina Booth (née Chapman, 96-06) were unable to run on the day due to last minute injuries.

The OP team ran in the OP colours of dark blue, sky blue and maroon and were joined by other OPs and members of the Pocklington School community who were running for their clubs. They were: Zoe Hughes (née Backhouse, 01-03), Jodie Hodgson (94-01), Patrick Dare (Current staff), Rachel Dare (OP office), Leanne Maycock (OP office) and Tim Maycock (Current parent) of Pocklington Runners and John Cooper (06-12) of Vegan Runners.

The race started at 9am on Garths End in Pocklington and after two consecutive weekends of storms Ciara and Dennis, the conditions were remarkably dry, mild and calm! Following the customary start-line selfie, the race was soon underway and with the help of the fantastic Pocklington Runners pacers and course marshals, the OPs made their way around the course finishing to the cheers of encouragement from the crowd of spectators who had gathered in the town centre. 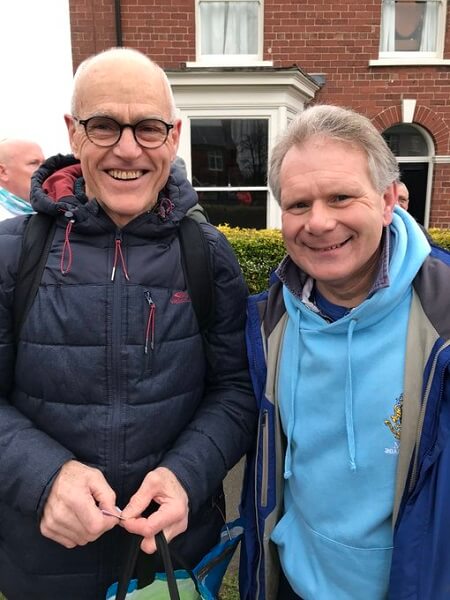 As well as race goodie bags and medals, OP runners along with their families and supporters enjoyed drinks and bacon butties in Judson’s after the race courtesy of the OP Association. Thanks go to the OP support crew of Doc Dyson (Former staff, 88-18) and Rob Peel (Former staff, 72-11) who did an excellent job of hosting on the day and looking after kit!

Beth Goodliff commented: “It was a great race and I really enjoyed it. It was a pleasure to run as part of the OP team. The staff and supporters who helped out and kept us going were fantastic. Count me in for next year!” 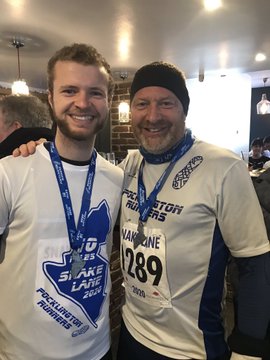 Trevor Loten (70-80), OP President, said: “There was a fantastic atmosphere in the town for the race and afterwards in Judson’s when I popped in. It was great to see the OP runners and their families. I hope more OPs will sign up for next year – I think I’ve just agreed to do it myself!”

Next year’s Snake Lane will take place on Sunday 28 February 2021. If any OPs would like to take part in next year’s event, please contact Rachel in the OP office by 30 September 2020. The OP team welcomes runners of all abilities and is very inclusive. Our ethos is to enjoy running and the challenge of completing 10 miles rather than worrying about how long it takes to do it. We hope to see you there!

Photos from the day can be viewed in the Flickr album here.