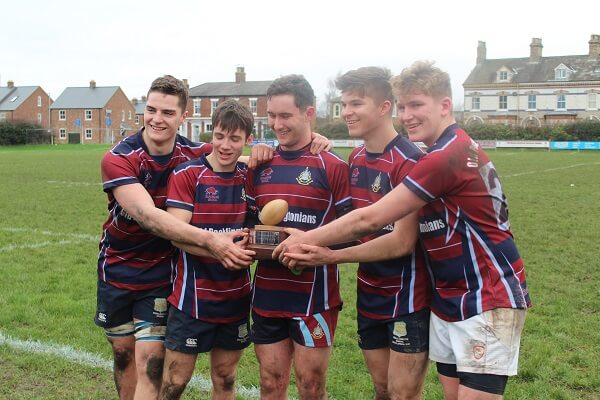 The annual 'Town v Gown' rugby game produced an entertaining encounter that saw the teams all square at the break before the Old Pocklingtonians pulled away in the second half to retain the Bottomley Trophy by 29-46.

It was another notable festive occasion that drew a big Boxing Day crowd to Feathers Field where town and school teams have done battle since the 1880s. This year both had big squads, Pock some 34 players and the OPs 22, with many renewing old acquaintances for and against, and many more enjoying their reunion on the sidelines. And the sides included a wide range of individuals from teenagers to veterans, some coming out of retirement for a run out.

Pocklington opened the scoring when David Davison made an eighth minute break and Jack Holbrough took over - he may have not played for over a year but still knew his way to the line. Three minutes later it was all square again and OP Alex Todd's charge down stuck in the bread basket as he galloped in from 20 metres.

On the quarter hour Pocklington kicked to the corner and prop Euan Walker muscled over from the lineout, but the OPs hit straight back in style as the ball went through 20 pairs of hands left, then right, and back inside for evergreen lock Dan Wilson to dive in.

It continued to be end to end fayre as Pock's Andy Little broke from defence then handed on for Reece Dixon's pace to take him clear down the clubhouse touchline, Harry Jackson converting.  Playing at three quarter, Fergus Croston soon replied in kind for the OPs as his quick feet on the Percy Road side brought the school's third try with James Hanley's conversion making it 17-17 at the break.

Both sides emptied their benches in the second period, and with Pocklington having a whole XV to bring on it caused them the greater disruption. The OPs were quick to take advantage and a chip over then a quick tap saw replacement wing Jonty Goddard squeeze in at the corner to put his side ahead for the first time.

It was still a close game with both sides having pressure and opportunities before the OPs landed the knockout punch midway through the half. Sami Eggleston invariably returns to his Pocklington roots from London to deliver a Christmas special, and though he had to wait for his opening this year he duly delivered, sprinting clear for two long range tries in quick succession, both converted by Goddard, to take the game away from Pock. And when another clean back break ended with prop Sam Garvey, now playing club rugby in Dublin, forcing his way over from close in the OPs were home and hosed at 17-41.

Though the OPs had made the most of their chances in the second half the contest had remained closer than the scoreline suggested, and Pocklington were the next to show as Marcus Britland bullocked over for Michael Gilbank to convert. And the game fittingly finished with more end to end action, Tarek Mursal's heartening recovery from serious crash injuries a couple of years back being cemented by a late try for the OPs; then Joe Deighton and Kenny Strangeway getting a last gasp score for Pocklington thanks to the former's visionary crosskick and the latter's strength to the line.

If you would like to see addtional photographs from the event please visit the Andy Nelson Sports Photography facebook page.