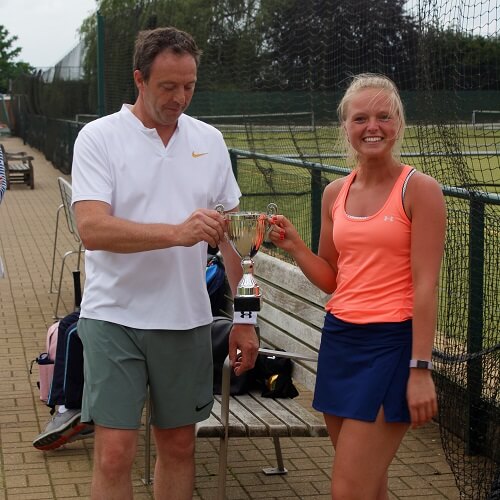 The annual Edmund-Loten Inspire mixed doubles tennis tournament, now in its fifth year, took place on Sunday 23 June in the afternoon as part of the OP Summer Reunion.

Two groups, each containing four pairs, consisting of a mixture of current and former staff, parents, pupils and OPs battled it out for the Edmund-Loten trophy.

After the group stage, with some really enjoyable tennis despite the incredibly windy conditions, the competition became more intense in the semi-finals! Mother and son Christel and Charlie Wake (3rd-year) put up a good fight against John Medforth and Frankie Marsh (06-13) before going down 6-2, whilst Jessica McDowell (4th-year) and Trevor Loten (70-80) lost 6-4 to Charlie Medforth (09-18) and Sue Sumner (former staff 89-10) in a titanic battle! With James Sweeting (81-88) stepping in for John in the final, it looked as though Charlie and Sue had one hand on the trophy as they raced into a 4-1 lead, only for James and Frankie to fight back and take the match into a tie-break. After predictable ebbs and flows, James and Frankie eventually triumphed 7-5.

Many thanks to those who competed and we hope to see you all, plus a few more players, next summer – all welcome!